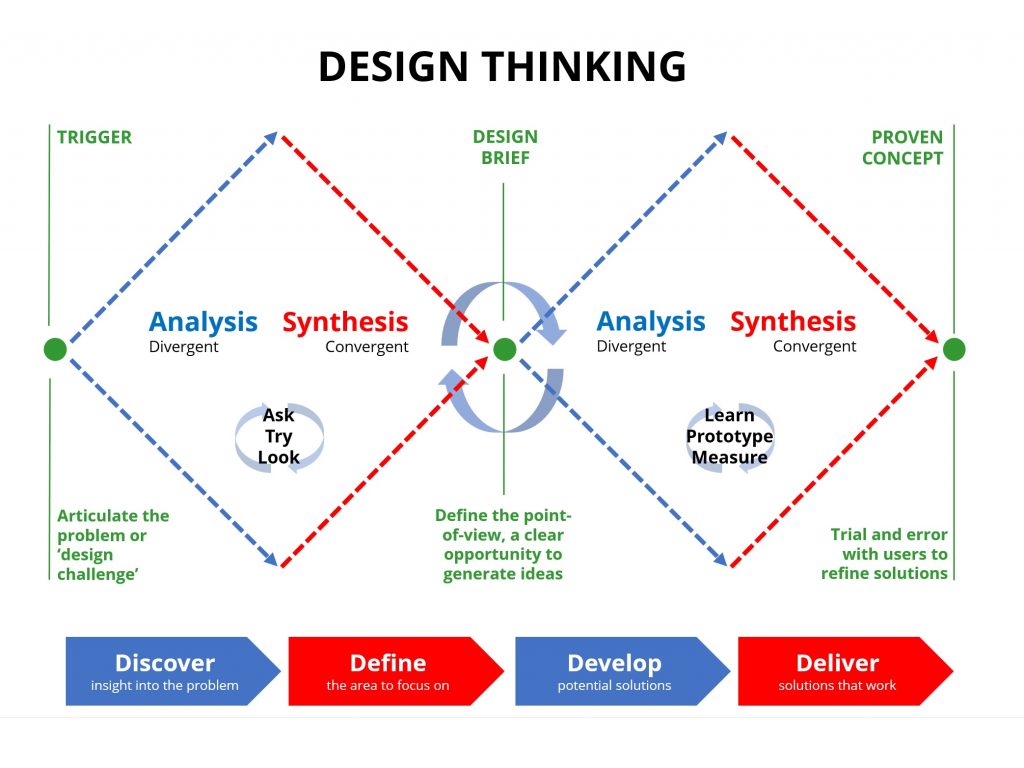 Adapted from the Double Diamond Design Process from the UK Design Council, 2005

Here is my growing list of some common words and phrases of Design Thinking – although many of these words are used in all of the courses I teach.  Some of the words or phrases below have a slight different, or more specific, definition than we’d use in a hallway conversation.

If you have other words or different definitions you like included, or your definitions vary from those listed below, please add your thoughts in the Comments section below.

Abductive Thinking.  The ability to take away the most logical assumption, explanation, inference, conclusion, hypothesis, or best guess from an observation.

Analysis.  The process of breaking down a big single subject, topic or problem into multiple fragments.  This is necessary for improved understanding.  (See Synthesis for contrast.)

Angel.  Someone who counsels and supports the design team by acting as the liaison between the team and senior management.  This person typically sits on – or has the direct ear – of the senior team.

Behavioural Psychographics.  Statistical data defining how an individual behaves when introduced to, when they use, or when they think about a company, association or organization, or its specific product, service, offering or industry category.  Examples of behavioural psychographics:  a) Likes to demonstrate their technology skills and knowledge in front of others; or b) Prefers to purchase products which have a positive impact on the environment.

Convergent Thinking.  The ability to identify the best solution to a specific problem (and often a stated goal or outcome.)  It has many qualities similar to Strategic Thinking.  See Divergent Thinking for contrast.

Decision-Making Process.  Tools, tactics or incentives (often from Marketing) that motivate the end user to agree with or change an opinion or belief, or to change an action.  (For example, to purchase, to vote, to join, to endorse.)  Examples of decision-marketing elements include in-store sampling, “test drives,” money-back guarantees, knowledgeable sales staff.

Emotional Intelligence.  The capacity to be aware of, control, and express one’s emotions, and to handle interpersonal relationships judiciously and empathetically.

Empathy.  The ability to identify and understand the feelings and perspective of another, and to respond appropriately.

End user.  A group of people (preferably defined by their behaviour, not statistics) who engages with your organisation.  However, they probably don’t share a mutually agreed-upon attitude, opinion or behaviour/action.  Synonyms of end users may include:  customer, consumer, (primary) target audience, buyer, act-er, stakeholder, shareholder, tenant, among many others.  End users can be an external group of people (such as a customer) or an internal group (such people in another department, team or agency).

Group Think.  The practice of thinking or making decisions as a group, usually resulting in poor and unchallenged decision making.

Influencers.  People, things or events which have the power to sway (directly or indirectly) the target audience’s thinking or action by means of argument, example or force of personality.  This group does not include the media.  Examples of influencers:  professional trade organizations, unions, religious symbols or holidays, celebrities.  (See Media for contrast.)

Inside-Out Ideology.  Based on senior management’s belief that its inner strengths and capabilities will make the organisation successful.  (See Outside-In Ideology for contrast.)

(no) JABS.   No judgements, biases or assumptions.

Media.  Consumer, trade, industry or vertical media which the target audience uses to make, shift or reinforce attitudes, beliefs or knowledge.  This section should include HOW they use the media as well as the specific outlets.

Mystery.  An ambiguous situation that is difficult to understand, explain and solve, often because there is too much information, much of it misleading, inadequate or contradictory.

Persona.  A fictional but highly realistic character representing the end user of an organisation’s service or product, primarily based on direct research and engagement of their unmet needs, behaviours, experiences and goals.  Personas are similar to profiles, but the latter tends to be more general and built on demographics (statistical, factual traits of the end user, such as age, gender, job).  Personas focus more on psychographics (behavioural data, such as attitudes and opinions.)

Problem Solving.  To determine what went wrong in the past, to understand what caused today to be the way it is.  Often, problem solving involves laying blame.  Its preference is to solve the immediate issue (or at least be most expedient), but not necessarily the root cause.  Problem solving is focused on doing the right thing.  (See Solutions Finding for contrast.)

Psychographics.  Statistical data which specifically study and measure general attitudes, behaviours and lifestyle choices, decisions and opinions.  They are not specific to a particular product, service or category.  Examples of psychographics:  Interested in new technology or Concerned about the environment.

Solutions Finding.  To determine how to improve the future, to make a product, service or position be better than before.  Instead of laying blame, Solutions Finding focuses on understanding what was learnt through mistakes and errors.  Its goal is to look for possibility, often in collaboration with key audiences to find the best solution to solve the issue.  Solutions Finding is focused on doing the thing right.

Synthesis.  The process of (re-)combining fragmented parts into an aggregated whole, usually at the end of a scientific or creative enquiry.  By assembling the individual elements into a bigger entity (or at least to an insight), something new and fresh may emerge.  (See Analysis for contrast.)

Trigger.  Something that has happened, typically an occurrence that’s out of the ordinary, unexpected or surprising.  Oftentimes a trigger might be a symptom of or the result behind a larger problem.  Triggers give design thinking programs urgency to fix the problem.

Values.  Deeply rooted principles or standards which are universally accepted among the target audience and which explicitly guide what they believe and their attitude toward a specific topic, and ultimately how they behave.  See a complete list here.

Visual Thinking.  A way of communicating by using images, diagrams, process flows and relationships to represent information, association and insights.

Wicked Problems.  A problem difficult or impossible to solve because of incomplete, contradictory and changing requirements which may be difficult to recognise.